This post is part of a series provided by CCI members that are part of The Bahamas delegation at COP 21.

The Bahamas delegation took part in the COP 21 pre-meetings from November 24-28, 2015 at UNESCO in Paris.  The Bahamas is part of two major party negotiating groups: Alliance of Small Island States (AOSIS) and  G-77 and China.  You can read more about party groups at the following link: UNFCCC Party Groupings

Both AOSIS and G-77 and China held meetings during the week to determine their positions on key issues that will be negotiated during COP 21.   Meetings were also held to finalize the opening statements of these groups that will be submitted to UNFCCC.  Issues that are particularly important for The Bahamas include adaptation and loss and damage.

On November 29, 2015, the opening plenary of the Ad Hoc Working Group on the Durban Platform for Enhanced Action (ADP) took place.  The ADP is a subsidiary body created in Durban, South Africa, in 2011.  The body i responsible for negotiations on the universal climate agreement that is intended to be finalized during COP 21. The plenary was held in advance of the official opening of COP 21 scheduled for November 30 in order to give parties as much working time as possible.  At the plenary, the logistical arrangements for the contact group and spin-off groups that are responsible for revising and finalizing the text were given.  You can read more about ADP at this link: UNFCC ADP

Pictured below are some members of The Bahamas delegation that were present at the pre-meetings and opening plenary of the ADP including Adelle Thomas, Lisa Benjamin, Philip Weech and Arthur Rolle. 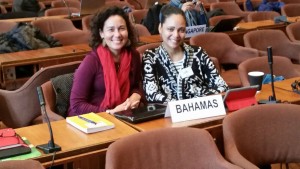 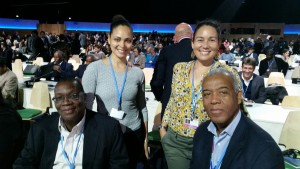